Our Jaguar Land Rover Shows are specifically targeted at our customers and their families who are interested in purchasing a Jaguar Land Rover Product. The purpose of these road shows is to take our savings message on the tour.

One of the greatest challenges for our team is to reach our customer base, we specialise in visiting our customers at work or home. Exhibiting at dedicated events, families or open days, allowing our Military & blue light customers the opportunity to meet us face to face and find out more about Jaguar and Land Rover product or service that we have to offer.

We travel across the UK and Europe in order to meet and engage with Hundreds of customers. The Marshall road shows team have been a part of families’ days or open events for over 15 years and offer our involvement free of charge. Organised by invitation, our team are standing by to help; we would love to attend your next families day or event. The fully trained team have a proven track record for security access and the protocols involved, offering added reassurance when requesting our access.

For more information or to arrange a visit please contact: terry@jaguarlandrovermilitarysales.co.uk
You can find details of our previous shows on twitter by searching. #JLRMilitary 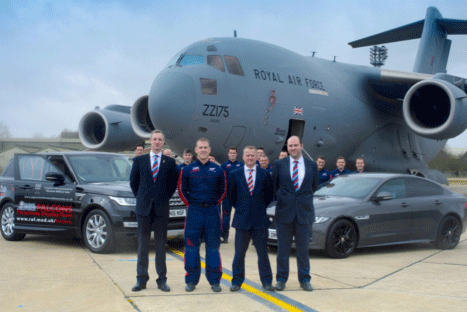 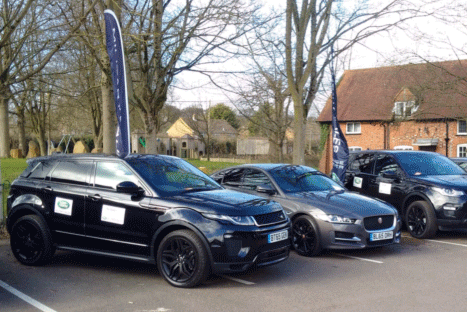 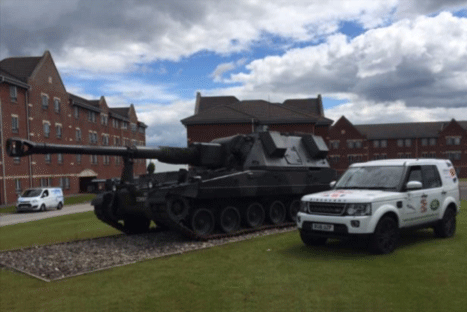 At Marshall we recognise the importance of supporting our customers in other aspects of their work and fund raising activities, and below are examples of how historically we have been able to do this.

2016 Range Rover Sport for the RAF Falcons at Brize Norton

Marshall Military sales are proud to support the Falcons with the loan of a new Range Rover Sport, we are looking forward with interest to seeing the display's taking place in the forthcoming show season, Thanks also to Group Captain Group Captain Polly Perkins; Head of Establishment at RAF Brize Norton for the introduction and to Warrant Officer Paul Floyd RAF Falcons Team Manager for his support. 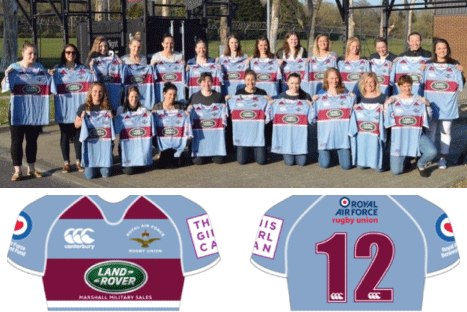 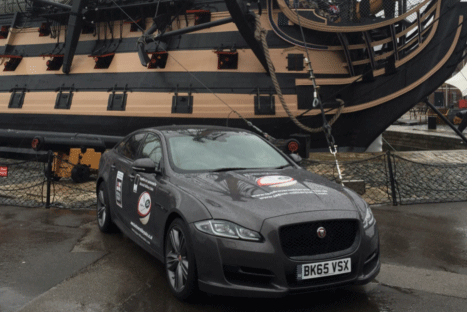 The RAFRUW 1st XV is almost exclusively composed of ‘Women’s Premiership’ Rugby Players. Whether it be for Litchfield or Saracens, Worcester or Wasps, you would be hard pressed to find a Premiership side that doesn’t included a RAFRUW player. Regularly featured on National Sports Channels and in the printed press, many RAFRUW players are gathering media plaudits and turning the heads of International selectors.

Marshall Military sales supporting the Royal Navy via the loan a stunning new Jaguar XJ this wonderful vehicle were loaned to Ash Coates, head coach of the navy rugby team, throughout the season Ash will be driving vehicle to each game and around his home base in Portsmouth. 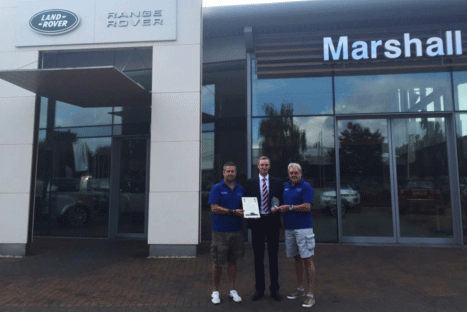 2016 Marshall Aerospace and Defence Group has won a Queen’s Award for Enterprise in the International Trade category.

The ‘off-roading’ rally is organised by Keith Bowen and his son, Tim Price-Bowen and sets off covering a staggering 2000 miles through Europe following the path of the WW2 Allied Invasion. The Help for Heroes 4×4 European Rally, every year Marshall Military Sales support the H4H rally via a liveried Discovery for the event. Marshall Military Sales has been a long-time supporter of military charities including Help for Heroes.

Keith said “Marshall's has been with us from Day 1 on our adventure known as the Help for Heroes 4x4 European Rally - which has seemingly become an annual even. From our perspective, as organisers and on behalf of the crews that take part, we remain hugely indebted to you for your magnificent support and association with the rally - a mega 'thank you'. 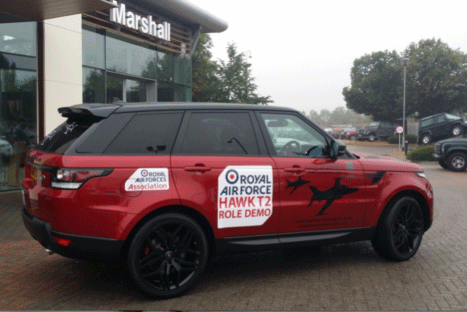 The Hawk Display team is the public face of Number 4 Flying Training School (4FTS) based at RAF Valley on Anglesey and their full time mission is to train the Royal Air Force and Royal Navy combat pilots of the future. 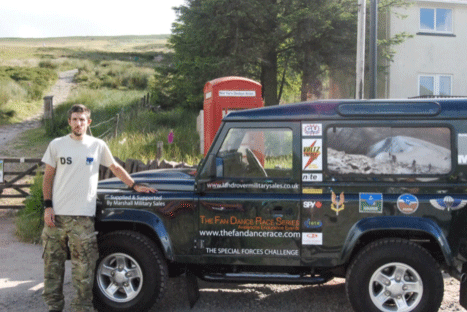 Marshall Military Sales have risen to the challenge by providing a special liveried Defender to support Ken Jones running up to this year’s Special Forces fan dance race. The event is a gruelling 24km non-navigational race over two sides of Pen Y Fan, the highest mountain in the Brecon Beacons. This infamous route has long been a part of SAS (Special Air Service) and SBS (Special Boat Service) Selection and is considered the yardstick of a candidate's potential to perform well on Test Week and ultimately pass the Special Forces Selection programme. Running up to and after this year’s event the Defender will play an integral part in preparations. 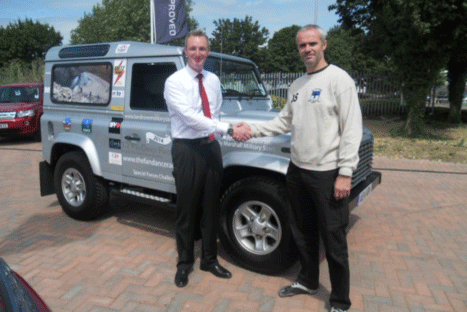 On the 4th of October Military Sales delivered four livered vehicles to the organisers of this wonderful event, through our support in Marshalls, Richard was able to provide the vehicles, fuel and insurance for the support teams to follow the runners during the event.

On Saturday 5 October, members of the legendary RAF No. 617 ‘Dambusters’ Squadron embarked on a heroic challenge to run 700 miles in just 7 days to raise money for our charity.

The 700-mile route passes through landmarks in Dambusters history, and. The partnership with 617 Squadron has raised an estimated £180,000. 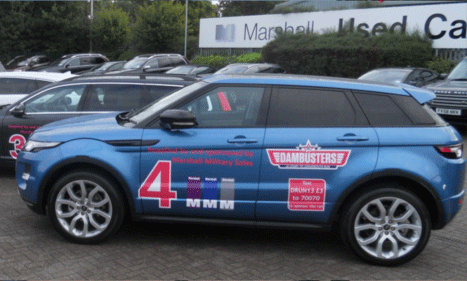 Military Sales Manager.
Many thanks to you and Richard for your help! We really are very grateful for your offer of four vehicles to support the Dambusters Run. 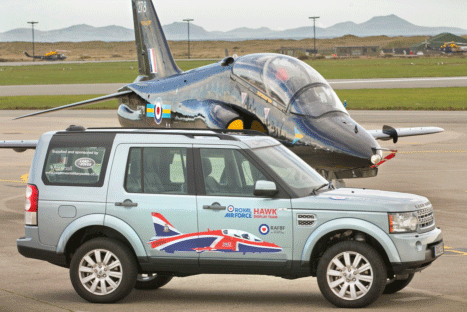 Marshall Land Rover Military Sales has been delighted to support the RAF Hawk Display Team by providing a Land Rover Discovery as part of the package to assist in transporting the pilots of the team. The Hawk Display team is the public face of Number 4 Flying Training School (4FTS), based at RAF Valley on Anglesey, and their full time mission is to train the Royal Air Force and Royal Navy combat pilots of the future.

We may receive a commission from our lenders for arranging finance for you. For further information on our commission arrangements please see our Finance Commission Disclosure Statement

More about our credit-broking services & our insurance distribution activities

Shows and Support
Partners
Find us